This is a story has originally posted on our international site, but it’s too good not to share here. Our international team ecently we had the privilege of visiting a brand new 24-7 Prayer room in Sutton, just outside London, where a Vineyard Church saw incredible answers to prayer before their permanent prayer room even existed!

Our story, like many others, begins with members of our church faithfully praying for our town.

Back in 2012, during a prayer meeting in a fourth floor flat, the Lord gave the group the word “lighthouse”. This came along with the sense the lighthouse would be situated in the High Street, and its beam would reach across to the London skyline.

Over time our senior pastor, Jason, felt challenged to do more to stimulate the prayer life of our church. With the dream of catching a heart for prayer, a team went to the 24-7 European Conference in Geneva in 2016. They came back passionate about what they’d seen and learnt.

Jason felt led to walk around disused buildings in Sutton and pray for one of them to be released for prayer. He got some strange looks from people as he stood outside buildings praying in the early hours of the morning!

As he was praying, he felt the Lord say two things:

1. That God wanted to provide a miraculous answer to our prayers that would ignite prayer for us as a church.

2. That we needed to pray for a place to pray and that as part of this God had a ‘man of favour’ in store for us.

Just two months later, the Lord brought Jason together with the new landlord of an old, notorious pub in Sutton, called The Dolphin. It had previously been closed down by our local authority.

Jason awkwardly asked him if we could use it for free for prayer and, miraculously, the landlord said yes! 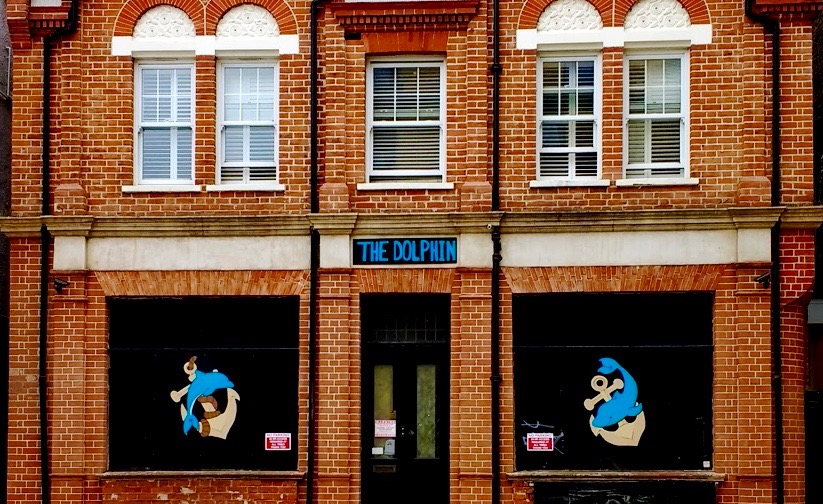 We started meeting there to pray in groups and as a church. Prophetic words emerged about us taking on the Dolphin for community space and permanent prayer room so we continued to pray.

We later learnt that a dolphin on an anchor (the symbol on the window) was one of the earliest Christian symbols found in different places in the subterranean church. This keeps reminding us that God has always had a plan and been present in the building.

We went back to the landlord, who was excited by the vision, even though he wouldn’t call himself a Christian. He even said no to a guaranteed contract from a restaurant for the space, losing considerable legal fees, to give us time to see if we could take the place on.

But despite the damp and lack of toilet, God turned up, and we had stories of people singing and dancing the night away with Him.

Our big dream was that the space would be a place of unity – and we have at least 7 local churches using the room with Christians of all sorts bumping into each other!

We have miracles of people distant from God feeling moved to come to the prayer room and finding exactly the right person praying there to lead them back to Jesus. Our landlord, the man of favour, has even done an Alpha Course!

And five years after the picture of a lighthouse, we’ve launched a new community ministry out of the Dolphin called “the Lighthouse” – independently named without knowledge of the picture!

When we look back, one of the most amazing things about our journey is that we were, and are, not prayer giants.

Our story is of people who were really quite bad at prayer, but wanted to be better, So we prayed about it. And God did the rest.

Here more stories like this by visiting our international site.